So back in spring when I was looking at the world cup timetable trying to work out just how I could maximise my time around South Africa, I was really reluctant to apply for any tickets in Johannesburg. When you googleÂ “most dangerous cities” or read articles like this one on CNN, “The world’s most dangerous cities“, there’s not really a lot of reasons to get you to pay a visit to “Jozi”. To quickly put it into perspective, aÂ quick comparison shows the “murder-rate” for South Africa is 49 per 100,000 per year, while Ireland’s is 0.9, and of course most of that is focused around Joburg.

But you have to look at the things with a little perspective. If you go looking for trouble, then chances are you’ll find it. This is going to be true whether you’re on O’Connell Street or in Johannesburg’s CBD. From talking to so many people over here I was told that almost all of those victims of violent crime are gang-related and so not reflective of everyday life. A taxi-man in Durban put it simply, “You aint gonna lose your life brother, maybe just your wallet, eh!” 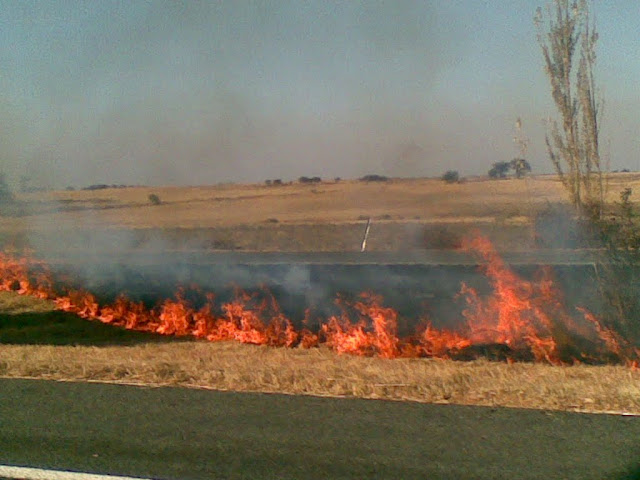 Joburg is on fire, click image to view gallery "From Durban To Jozi, Photos LITERALLY From The Road"

Typically the first half-hour of my time in Johannesburg would also prove to be my most traumatic. I was driving in from Bloemfontein and was greeted by massive plumes of smoke emanatingÂ from the road ahead. Cars weren’t slowing down though, instead it seemed like they were speeding up. Turned out the ditches and hedges along the side of the road were all ablaze.

I later found out this is a winter ritual that people practice all over the state of Guantang as lots of people are forced to walk through bush to work or the shops or wherever and it’s safer and clearer if the growth is all just burnt. Weird. I’d have just bought a strimmer and set of hedge-clippers but hey.

When I wheeled off the freeway and stopped at my first set of Johannesburg traffic lights, or “robots” as they’re known here, I was in for another shock.

I was greeted by the sight of a young girl who couldn’t have been much older than 16 seemingly trapped in a manhole. It really was quite the site, and the look in her eyes as she stared at me screaming for help almost made me get out of the car. And then, some instinct just kicks in reminding you what every single piece of safety advice tells you, never get out of your car at traffic lights! They turned green and I floored the little Kia’s accelerator and sped away. I can only assume she was a plant on behalf of some sort of criminal gang trying to get tourists to abandon their cars and get out and help her. I sure hope so. Besides what type of a girl gets stuck in a manhole anyway?

This intro made for one of those moments where you just think, “isn’t it great when a city lives up to its reputation”. I’ve had that experience before when I flew into Paris last winter and saw a monochromatic scene out of theÂ plane’sÂ window as the thick snow covered every inch of the city with the only black appearing where the city council had cleared the roads. But this Joburg introduction was something else!

The other thing that stressed me out on day one was the accommodation. What’s this, me, moaning about my place of rest on my blog? That’s a new one! Oh no wait, no it isn’t:Â Bloemfontein…Â Anyway I was staying in the Ball n Kicka Fan village. This was far from my first choice, but they were close to the park and rides and promised good security and parking and all that stuff and were one of the few options still with vacancies. At R500 a night, it was far from cheap, but hey it couldn’t be that bad, right?

I should have smelt a rat when I checked the terrible online reviews a few days before checking in, but at that stage they’d already charged my credit card due to their “FIFA World Cup special pre-stay payment system”. So anyway, imagine 6 annoying univeristy students being put in charge of a accommodation management for 400 football fans and you get a picture of the standard of administration here. Now I didn’t mind the tiny cold room or the lack of the advertised wifi, but when you’re being so badly ripped off it’s at least nice to see your assailant with a smile on their face, rather than the sullen hang-dog expression all the staff seemed to possess there. But amazingly I’ve still found 3 positives for the Ball N Kicka! Bring on the bullet points! 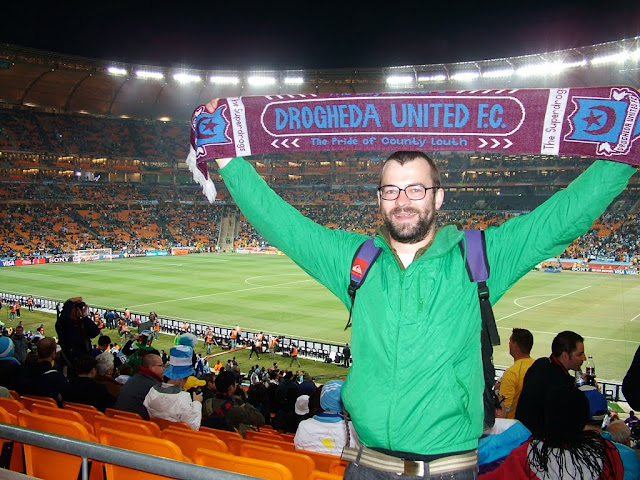 The two games I went to were both great. Soccer City goes straight to the top of my favourite stadiums list. It’s unlike any other ground I’ve ever been in and the reception for the Argentina team was incredible.

To go to Ellis Park the next night to see Brazil take on Chile was a nice wee adventure too. It’s quite a historic ground due to that whole Mandela/Pienaar 1995 Rugby World Cup thing, so great to say I’ve been there. But it lacks the nice design considerations that all the FIFA-funded grounds like Soccer City, Cape Town’s Green Point Stadium or Durban’s Moses Madhiba Stadium have. Brazil had the game sewn up quite early on and I genuinely thought I was watching the champions elect, but we’ve subsequently found out this is not to be the case. I have watched all four of the semi-finalists through the course of the tournament and Brazil were by far the most dominant side that I saw. But I guess it’s what you bring to the table in the crunch quarter-finals where you’re really challenged that really matters.

We all took the park and ride shuttle bus to both games which was a fun experience. The city of Johannesburg has invested really heavily in a new commuter bus system, Rea Vaya, which it now hopes will continue to be popular after the world cup. From my own experience, and I know this is tainted by the world cup, it was fast, safe and cheap. If it gets more people out of the dangerous minibus taxis then it can only be a good thing.

Aswell as visiting the famous Apartheid Museum (powerful stuff, presume my reaction was the same as the millions who’ve visited before so I won’t discuss it here), I also went to a transport museum and a lion park, which were both lots of fun, though for very different reasons! Gotta love dem buses. 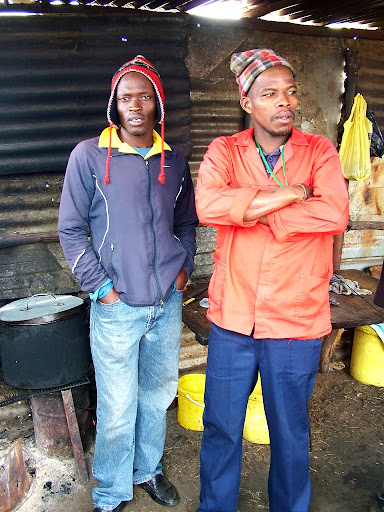 On the second-last day in Johannesburg I went to Soweto on a bicycle tour. Soweto (South-western township) is one of those things everyone says you have to do if you’re in Joburg. I was sort of sceptical though, as from what I could work out most tours just drive round and encourage people to look out their window and take pictures of some of South Africa’s most poverty-stricken areas. I knew I wasn’t going to do something like that, but when I heard about Lebo’s Soweto Bicycle Tours, I thought maybe a tourÂ could be done with a bit of dignity. And I hadn’t cycled anywhere in a month so figured now’s the chance!

Our guide was great as he grew up in the area (calling Soweto an area undersells it, an estimated 1.3million people live there with an insane population density of nearly 23,000 people per square mile according to the Wikipedia entry) and so knew exactly where to go to get a sense of the place. And lets be fair any place that has housed the likes of Nelson Mandela and Archbishop Desmond Tutu and plays such an integral place in the history of apartheid-era South Africa is worth a visit.

We would park up the bikes every few minutes and, shock horror, just stop and talk to people. Got to have some nice shibeen brewed beer (bitter and milky but strangely enjoyable) and some strange meat from some type of antelope if I remember correctly (amazingly nice. I love antelope). I reckon the cycling and walking meant there were none of the superiority complexes that you would no doubt develop in an air-conditioned Mercedes mini-bus. I’m trying not to be patronising here (they don’t call me patro-nige for nothing), but meeting some of the local kids was pretty heart-warming too. When they come up to you and pull on your t-shirt and point to your camera and say “shoot me”, even if you have any social reservations about taking their picture you pretty much have to do it, or else you’ve made some nasty little enemies! Plus they loved actually seeing their picture afterwards on the camera, nice to think you can still make someone’s day just by taking their picture. Anyway, enough patronising, safe to say Soweto gets a big thumbs-up. 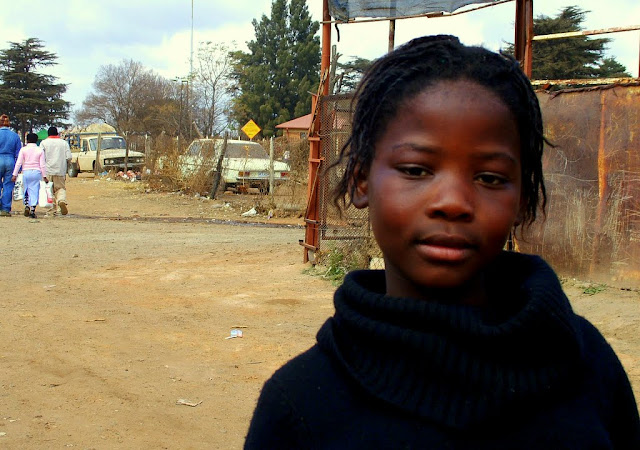 Overall Joburg isn’t somewhere to be afraid of. I’ve already written too much I didn’t venture out too much after dark anywhere other than the stadiums, nor did I go looking for any drugs, fire-arms or prostitutes. And that mentality seems to have worked as it looks like I managed to get out of their alive.

outro: am actually now back in Joburg in a hostel after a great few days in Cape Town. My Etihad flight returns to Dublin tomorrow. Sad times. I’ve more South Africa pictures/writing/recapping to do though, and something tells me the fact I move to Canada next Tuesday may be worthy of an entry or two…

This entry was posted in Joburg, Photos, South Africa. Bookmark the permalink.